Lately, I kind of feel like my body has been replaced with one of those little Jack-in-the-boxes, with a crank on the side that someone turns to play semi-creepy music. As they turn, the music plays faster and the tension increases. When this combination has become almost unbearable, the top of the box pops open and a terrifying clown pops out.

Am I the box? It certainly feels like an apt metaphor. I can feel myself being turned and twisted ever tighter by so many people around the world, and all I can do is try to breathe through the awful music and constraining pressure coming at me from all sides and pushing me down, down, down.

Last night as my husband sat meditating in the dark before bed, I tried focusing on my breath to calm the tightness in my belly and chest.

I made it through a few cycles of breathe before I suggested to my husband, “I wonder if maybe it is not a good idea to have a statue of Shiva in the house.”

What does Shiva represent? came my husband’s voice.

Shiva is both destroyer and creator of the world. Maybe, Shiva is the reason that everyone is crashing down around me.

Hmmm…yes, we probably don’t need this in our house. Perhaps, you could gift Shiva to someone else?

Yes, though I’m not sure I can really blame Shiva for this mess. I mean, how can I ever have even a small about of control when there are so many other people making choices that affect me?

It’s true. We can only control a little bit in our lives.

I thought that perhaps I should learn more about some of these powerful Hindu gods before bringing them home and placing them on a shelf. I knew that Ganesh with his trunk pointed to the left was the remover of obstacles and offered cooling energy. Once, I brought home a Ganesh with his trunk pointed to the right, only to find after doing a little research that if I didn’t pray to him every single day he would bring fire energy and turn my entire world upside down.

I don’t have a great track record for remembering to do anything except fret and borrow troubles from the future (as my husband describes this behavior) with such stringent structure, so I brought right-trunked Ganesh back to the store. I have been very careful to check the direction of his trunk ever since.

What about Shiva, though? Could Shiva really be destroying the tenuous walls of stability I had been carefully constructing around me for decades, and was it necessarily even a bad thing to have them come crashing down?

According to the BBC website page on Hinduism and Shiva, this destruction is not arbitrary, but constructive. Shiva is therefore seen as the source of both good and evil and is regarded as the one who combines many contradictory elements (BBC, para. 3).

When I think about the elements of my life that are crashing down, I think if I can just get past the constant barrage of pounding waves, the world that I create in the wake of destruction might just be a better one.

As I read about Shiva, I think that I might just be one of his descendants.

Shiva is known to have untamed passion, which leads him to extremes in behavior (BBC, para. 4).

Untamed passion? Behavioral extremes? Sounds eerily familiar. When my husband and I discuss the uncertainties of life, I am reactive and extreme.

Do you need to be so dramatic? He will ask me and sigh. Poor man, stuck with a feral squirrel in a box, constantly trying to rip its way out.

I’m not being dramatic, I humph in return. I am being realistic.

I know he’s right, of course. When it comes to being grounded, he is the still water to my skipping stone. I shake things up. Hell, I shake myself up, and he watches from beneath the surface, breathing a return to peace in the wake of my overlapping ripples.

What if the statue serves as a reminder that we all have Shiva potential inside of us? We each have the ability to destroy or let go of what no longer serves us and to create a new life with intention, awareness, and consciousness.

As I look back over the past decade of my life, I see a train tearing down the tracks, destroying everything in its wake as it rushes. Flames lick the edge of the caboose, urging it ever forward toward the cooling, calming waters of the ocean in the distance.

Is the ocean a mirage? Is it possible to outrun the fire?

My old life involves attachment and the influence of many people over whom I have very little control: a house thousands of miles away with a mortgage, expensive repairs, and reminders of my painful time in life; renters who trashed the house when they moved out and who have continued to haunt my email inbox.

In my new life, I am a renter and not an owner. I have fewer ties holding me down to one place. I have less stuff. I am more free.

Could it be possible that I brought Shiva home to help me sever the final ties to my previous life? After all, it has been seven long years since I left my home in Alaska in search of more sustainable waters.

If I am Shiva, it is quite clear to me that my husband represents Shiva’s wife, Parvati. He is the cooling energy to my constant, roiling inner fire.

It is Shiva’s relationship with his wife, Parvati, which brings him balance. Their union allows him to be an ascetic and a lover, but within the bounds of marriage(BBC, para. 5).

I can see Shiva’s work in lines from the song that runs ever faster inside my Jack-in-the-box:

I’ve no time to wait and sigh
No patience to wait ’til by and by
Kiss me quick, I’m off, goodbye!
Pop! Goes the weasel

Nothing is permanent. Everything is fleeting. We control only how we move through an ever-unyielding current. Yet, even in this uncertainty, we can choose how we move

Perhaps, I can create a Marieke-is-her-own-box, where I choose the music, I turn the crank, and I choose how and when to pop out of the box as a new version of my Self.

I think I will try this song a dear friend shared with me now many years ago.

This summer I swam in a public place
In a reservoir, to boot
At the latter I was informal
At the former I wore my suit, I wore my swimming suit

I love to swim. I love being near the ocean, as if just sitting at the edge brings me to a place where anything is possible. I can build a sandcastle, but the ocean will eventually wash it away. I can sit at a distance and watch the waves. I can stand at the shore and let the water envelop the tips of my toes, scorching out fire and brimstone with its cooling touch and making little hissing sounds. When I am ready, I am run crashing into the surf.

I think maybe Shiva can stay a little while longer, at least until I see how this whole destruction piece plays out.

What about you, my friend? Do you have a Shiva fire inside? How does it live and breath? How do you wish to move through what Mary Oliver describes as your one wild and precious life (Summer Day)? What song will you choose to dance to in your own rhythm? 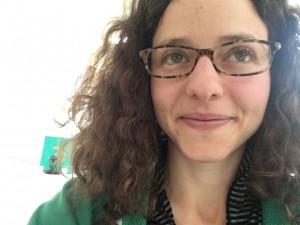 Marieke has been deeply inspired by the animals in her life, particularly her wolf dog, Okami, who embodied an otherworldy, buddhist spirit. She believes in freeing our inner being through self-study, the practice of meditation and asana, and in lifting our voices together in song.

Marieke offers a unique blend of Alignment-based Hatha Yoga infused with her own original music, which she performs during Savasana. Marieke has been studying yoga for several years and has earned a 200-hour RYT in Hatha Yoga at Lotus Bloom Yoga Studio in Prescott, Arizona. She is currently studying Anusara ygoa with master teacher Jayendra Hanley. Anusara blends Tantric philosophy with the alignment principles outlined in Iyengar yoga, honoring the sacred and divine in all beings. Join Marieke to explore the benefits of yoga, on and off the mat, and to open your heart to experience your greatest potential!

To read more of her work, you can visit her website Howling Wolf Yoga

Ground Your Kids! With Love and Yoga

What distinguishes Anusara yoga from other styles of hatha yoga?